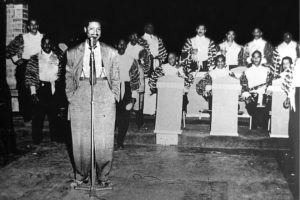 Benny at the Ali Bar in Havana

Benny Moré (1919-1963) was one of the giants at the center of the golden age of Cuban music. Arguably the greatest singer ever to come from the island, his name is still spoken with reverence and nostalgia by Cubans and Cuban exiles alike.

Unable to read music, he nevertheless wrote more than a dozen Cuban standards. His band helped shape what came to be known as the Afro-Cuban sound and, later, salsa. Moré epitomized the Cuban big-band era and was one of the most important precursors to the music later featured in the Buena Vista Social Club. Even now, to hear his recordings for the first time, it is impossible not to be thrilled and amazed. 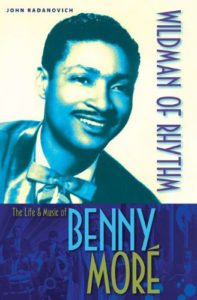 Wildman of Rhythm: The Life and Music of Benny Moré

“Wildman of Rhythm [is] the singer’s first English-language biography that finally exposes . . . this corner of the Earth to the genius that was Benny Moré.”—LA Weekly

“Captures the singer’s flamboyant manner, sense of humor and hard-living lifestyle, and his dedication to his family. Moré emerges finally as an immensely tragic figure, remaining in Cuba during the flurry of events surrounding the Cuban revolution that sent other artists abroad.”—fRoots Magazine

“Benny Moré’s life is the prism though which all music history must pass now. He is the missing link to the past, a giant of a figure alive and well again, at last.”—JazzTimes